It has been too long that I posted something on this blog. Ideas enough, but the time is lacking a bit (scarse resources). But this time a little different topic. It is about the pig sector.
At the end of december Tamara Bergstra defended her thesis on “welfare nd economics. The origin of this thesis lies in a discussion some 5 years ago on piglet mortality. It became general knowledge that piglet mortality in the Dutch pig farms was a little more than 12%. Questions were asked I n parliament about this and a program was initiated to improve the piglet mortality on Dutch pig farms. With better breeding and management it was expected that piglet mortality could be improved. At the same time, however, there were doubts whether these meausurements would improve the image of the Dutch pig sector with the general public.These doubts were fed by a fact that was (and probably still is) quite peculiar. At the time of the discussions, piglet mortality on organic sow farms was approximately 20%. But the public did nott worry about the organic pig farms. There is some kind of understanding: There is soething more than only the absolute figure of piglet mortality. We (prof. Elsbeth Stassen and myself) think it has to do with “trust”. Trust that farmers do their best to take good care about their animals. Our working hypothesis was that the general public does trust the organic farmers taking good care of their animals while there is a distrust towards conventional pig farmers:”they just want to produce as cheap as possible”.
The aim of the project was: 1. To find out the view of citizens towards the pig sector and to compare the view of citizens with the view of (organic) farmers and others involved in pig farming. Moreover, we wanted to make this work deeper than “just a questionnaire about viewpoints”. We wanted to work from a decent framework and link the viewpoints of the respondents with their “basic values”. This is typically the expertise of Elsbeth and I had the pleasure to discuss along and learn a lot about ethics and values.


2. To make a cost-utility analysis. What are the most efficient measures to improve the image of pig farming for the general public and how does this cost-utility link when comparing it to improved animal welfare. We hypothesized that the improvement of animal welfare is not linearly related to the improvement of image.
This was a totally novel approach. There is quite some effort to improve animal welfare, especially in north-western European countries and there is a very limited number of papers on the economics of welfare improvement (yet another field that is unexplored) but nobody looked at the image of production. And especially in the Netherlands, where the political power of farmers is very limited, there is such a thing as the “license to produce”. The society kind of has to grant the farmers the right to produce and farmers seem to have to earn this right more and more. So animal production is not only about producing something that your customers want to pay for (the economic licesense to produce) but also have to work on their public relations: citizens might vote against you. Some do by not buying your products, but more do by supporting animal right ngo’s or voting for a party that wants to regulate animal welfare more strictly or wants to decrease the amount of animal production. 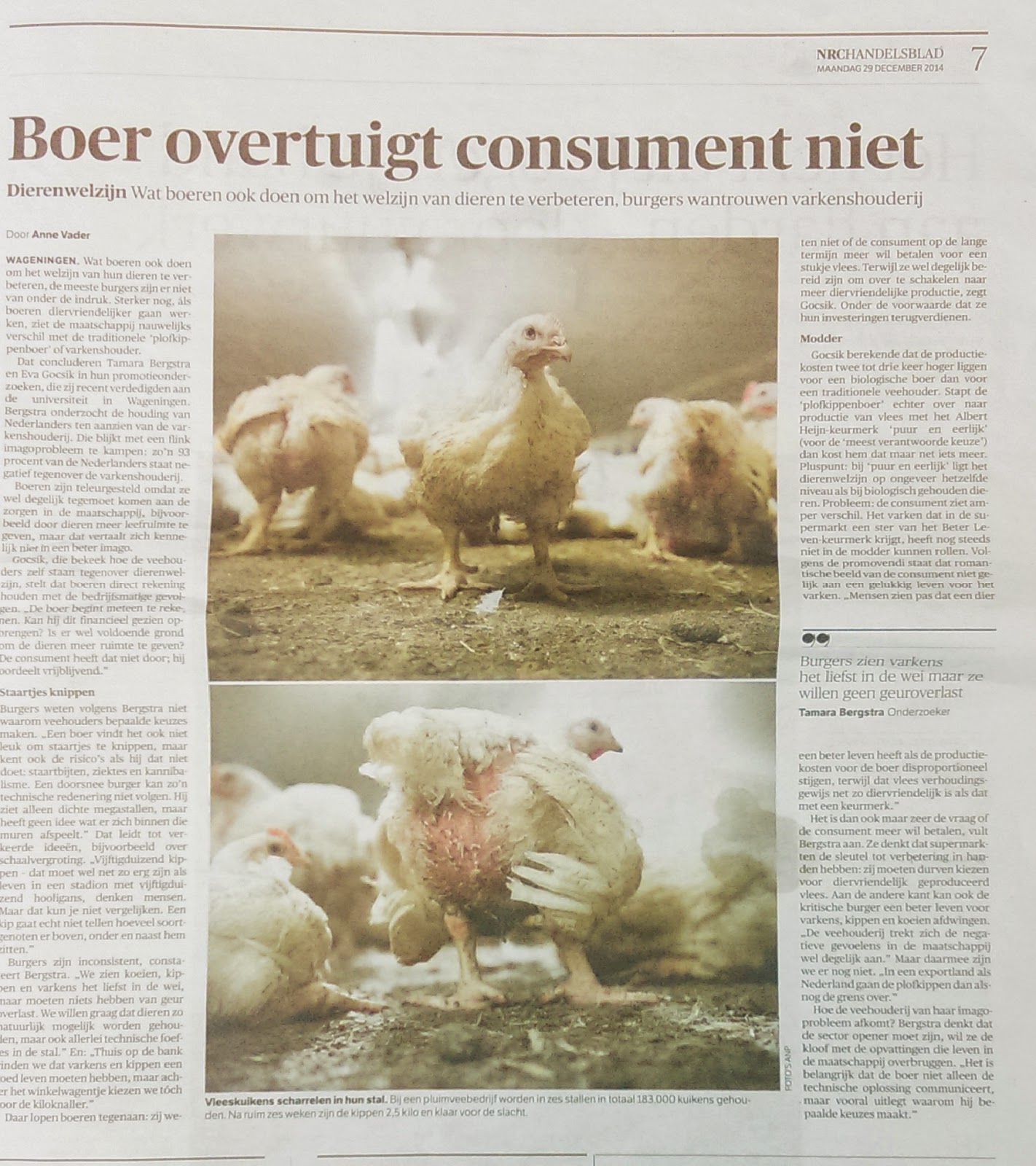 Interestingly, NRC, one of the leading Dutch newspapers, showed interest in the work of Tamara. In a double interview (Eva Gocsik defended her PhD thesis on the economics of animal welfare in the same week) NRC published a nice article about the work of these two young researchers. It is a pity that the editors have a bad choice in pictures.
Scientific publishing of the work of Tamara seems to be difficult. In my opinion, Tamara did great research, but it is all interdisciplinary and some papers did not even get the chance in journals. The first paper is recently published and others are the process of revision. We will make sure that papers will be published and will share the results with you.