Last weekend was Easter weekend. For the Hogeveen family this means that on first Easter day (Sunday) we go to church to celebrate the resurrection of Jesus Christ and after that spend some time with family. For second Easter day (Monday) it is time to go outside and because of that there are many activities.
﻿﻿﻿


﻿﻿﻿﻿
Since a few years, FrieslandCampina organizes the Campina boerderijdagen (farm-days) to bring the people in contact with dairy farming and the source their products. It think that they started four or five years ago with that initiative. This second Easter day, 43 Dutch dairy farms opened their gates for the citizens to see the way milk is produced. This year, Campina thought about adding a new element to the open days: Grazing. For the Dutch dairy sector and its aim towards sustainability, grazing is becoming an important item. See for instance the new quality program Foqus.

﻿
﻿﻿ ﻿
The open farms were farms that applied grazing and at exactly 12 AM the cows were let outside for the first time this spring. Those of you that have ever seen that: the first time that cows go out is great to watch. Cows are eager to go out, are partly blinded by the outside light and go out running and juming. All in all a great sight. 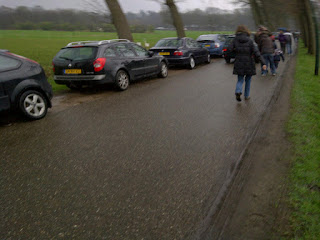 One of the open farms was (again) the farm, named Ooyevaarshorst of the Wassenaar family in Leusden. They are neighbours of my parents, so the plan was to have a look at this open farm and be there at noon. The morning was quite relaxed and we were a little late, but we could make it easy at noon. Wrong thinking!!!! We entered the small road leading to the Wassenaar farm and to our enourmous surprise, it was filled with cars and people all going to see the cows going out for the first time!! This despite the lousy weather, because it was raining cats and dogs. I understood that more than 3,500 people were present. 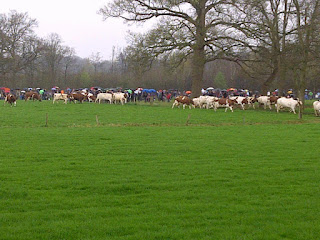 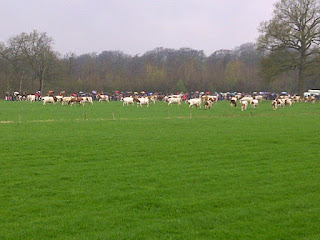 The 70 Red Holstein dairy cows of Niels Wassenaar going outside for the first time in 2012, watched by a large crowd of citizens.


Why this story on my, more ore less science oriented blog on Animal Health Management. As you might know, animal health is related to animal welfare and one of the reasons we are spending more and more efforts to control production diseases is the fact that production diseases are related to welfare of animals. Of course there are many other elements in animal husbandry besides diseases that are related to animal welfare. Grazing is one of these items. It enables cows to explore their natural behaviour much better than in a barn. Moreover it is good to prevent diseases as well, think about claw health and the reduced infectious pressure in pastures in relation to barns.

However, grazing is more and more difficult to combine with modern dairy farming, where herd seizes are larger, milk production levels are higher and more cows are milked with automatic milking systems. Therefore, there is a tendency amongst Dutch dairy farmers to keep cows inside year around. In science there is a debate whether this is bad or not for welfare, whether we can design barn systems that are as good for cow welfare as grazing. In a Dutch project: "De koe en wij", farmers are followed in their decisions with regard to grazing. At their website, much info on grazing and its effects, can be found. There are all kind of arguments that can be made in favour of grazing or against grazing. Scientists might even "prove" that certain barn systems are as good for the animal welfare as grazing, but we are forgetting the perception of the Dutch citizen. Cows have to be outside: that is natural. Period.

The success of these types of open days opened my eyes. I am afraid that we can try to "educate" the citizens as much as we want, but we will not succeed in convincing them that a "good" system without grazing is possible. Milk and milk products of Dutch original that are sold in Dutch supermarkets, should be originating from cows that have been grazing. The perception of foreign citizens and consumers might be a little different, so this might require different sources of milk for different customers. Demand-driven milk production. 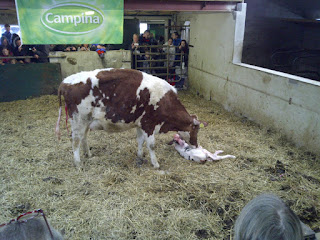 Finally, the visitors to the open farm day were lucky: a cow was delivering a young calf. I can imagine that Niels Wassenaar was quite nervous, doing this delivery with so many eyes watching, but luckily, the delivery went easy and a healthy new calf was born.
﻿ ﻿